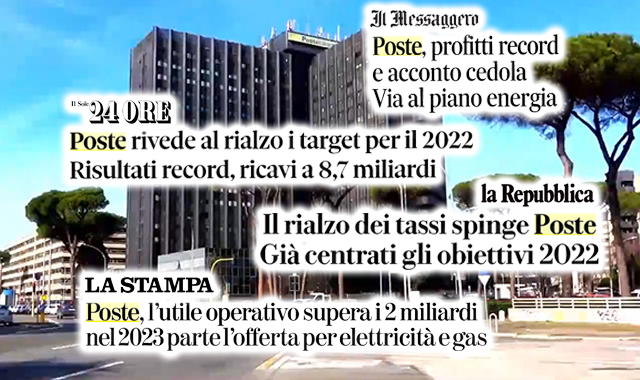 The Poste Group’s accounts find ample space in the pages of the daily newspapers, starting with il Sole 24 Ore and the headline “Poste revises its 2022 targets upwards. Record results, revenue at 8.7 billion”. The article in the business newspaper states that, “The company, led by Matteo Del Fante, announced that it has revised its EBIT target upwards, initially expected to be €2 billion, but will reach €2.3 billion by the end of December”, explaining that, “The figures announced yesterday show a 3.6% increase in revenue in the nine months, to €8.7 billion (+4.3% increase in the quarter). EBIT reached €2.1 billion for the nine months, an increase of 27.2%, with positive contributions from all sectors”. “Net profit”, continued the il Sole, “stood at 1.4 billion, up 21.4%. Total costs were €6.7 billion, down 2%. Based on these numbers, the management confirmed the dividend policy for this year, which includes an interim coupon of 21 cents, payable on 23 November”.

For la Repubblica, it is the rise in interest rates that is pushing Poste Italiane up. The newspaper also adds an analysis of the stock on the stock market, where “It has recovered 18% in the last month (a few points more than the financial sector in Europe). The stock was among the best, rising 4.32%, twice as much as the European reference index, rising to €9.75. ‘Despite the recovery, the stock continues to trade at compressed multiples, with a price of seven times earnings and a yield of 7%,’ wrote Equita, which sees possible rises in the Poste stock to €12.5. For Intermonte, which sees a similar price target, the results are driven by growth in financial services”.

While the il Corriere della Sera published a long interview with CEO Matteo Del Fante, La Stampa gave space to Poste’s accounts, quoting the words of Del Fante, who says he is proud “of the results achieved by the ‘mail, parcels and distribution’ division where, despite the difficult market environment, the recovery of parcel volumes in the third quarter, combined with cost reductions, contributed to a positive operating result for the third consecutive quarter”. The Turin newspaper also mentioned in the headline that, “In 2023, the electricity and gas offer will start”.

Turning to the other newspapers, Il Messaggero speaks of “record profits”, explaining that the development of revenue from payments and mobile phones “was also helped by LIS, the company that manages a network of 54,000 terminals located in bars, tobacconists, and other commercial establishments where people can pay bills or fines or make phone top-ups, the acquisition of which generated 29 million in gross revenue in the last quarter”. There is also an interesting analysis from il Foglio, in its article with the headline “Post, data, market lessons”. “The relevant point is not so much in the Group’s good financial figures,” it says, “but in the consolidation of strong positions in the core businesses, with excellent performance in the parcels sector, where revenue is returning and growth in the sale and management of financial and insurance products, with the life sector expanding strongly, up 23% year-on-year, for earnings of €460 million in the third quarter of 2022 alone”. According to Il Foglio, these are solid results that come after “Poste has gone through the pandemic, with the opportunities for more business for deliveries but also the need to live up to a much greater demand, also to support the business of the large e-commerce platforms”. The position gained “gives security and prospects for the future”, and it is precisely the long-term vision that “seemed most convincing to the market. Large-scale logistics for modern trade, savings management for households, financial services for companies, and the most revenue-generating sectors in insurance are the axes that guarantee its ability to withstand market shocks and open up excellent prospects for the long term as well”. Finally, Italia Oggi speaks of “record EBIT”’, which “reached an all-time high in the nine months at €2.1 billion (+27.2%), exceeding the target set for the entire year”. 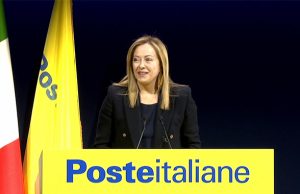